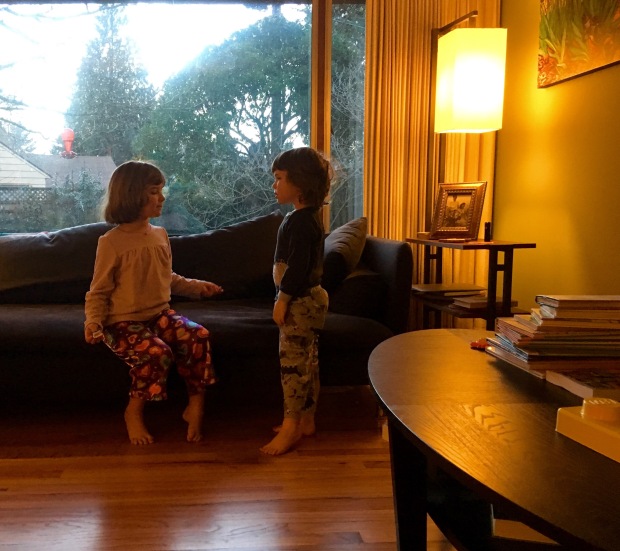 Amelia came out of her room this morning with a set of “letter cards” she had made “for Baxter’s classroom.” I asked her how she imagined the kids in preschool using them, and as she tried to explain, I suggested she try to show Baxter how to use them. Hilarity ensued (for me at least). She’s ridiculously patient. An excerpt:

Amelia: “Now I’m going to teach you some double sounds.”

Amelia: “That’s why I’m going to teach you.”

Another game she made up with the “letter cards”:

She puts out three letters and explains to Baxter what they all are. Then she asks him to identify them back by asking, “Can you touch B? Can you blow a kiss to E? Can you sing C?”

I think it’s interesting she wants to teach the kids letters because at their school, all the kids focus on phonemes first, not letters. 🙂 That said, phoneme cards might be harder to make than just a bunch of slips of paper with letter on them.

Bax got silly pretty quick and the lesson devolved into play quite gracefully:

Currently at Reddit, I spent 10 years as a community organizer on the WordPress open source project. I'm also an avid reader, wine enthusiast, and parent of two. View all posts by Andrea Middleton