Tom’s been working on building the kids a tree-related structure (we don’t have any trees that would support an actual tree house). Amelia has been his helper. Witness the half-done result: the tree deck!

Eventually it will have a ladder and railings and other fun accoutrements. Yay, we’ve been wanting to do this since we moved into the house, so it feels great to have made a start. 🙂

“This is how I look when I’m alone in my room with no one to snuggle me.” – Baxter

This morning we decided to bike over to Powell Butte and hike around. Powell Butte is about 7.5 miles from our house, along the Springwater Corridor, which google maps said would take us about 50m. I’m not sure exactly how long we took, but we stopped semi-often along the bike path, and had a nice time in the late spring sunshine. There’s a lot of bike theft along that stretch of the Springwater Corridor, so when we got to Powell Butte we decided against leaving the bikes, even locked up. I hiked a short spate either the kids, then doubled back and sent Tom in to hike a little with Amelia as Baxter and I snacked and rested. 4-year-olds have very different endurance levels compared to 7-year-olds, even when they’ve ridden the whole way in a bike trailer!

While we were hanging out, 5 riders on horseback came through and started riding on the trails! After our party was reunited once again, we rode back down the corridor, stopped for lunch at Cartopia, the food cart pod on 82nd (yakisoba noodles for the kids and banh mi for the adults) and then rode home. We were feeling our legs by the time we finished that last mile, and I’m pretty sure we’ll both be sore in the morning, but we had a really good time.

We had a fun Sunday morning hike at Hoyt Arboretum! We stopped for breakfast at Kormblatt’s Deli on NW 23rd (YUM), and then drove up to Washington Park to the arboretum. It was overcast, but the sun peeked through a few times. We more or less did a one-mile loop, and the kids only declared that they were tired and likely to die a few times. Maybe with increased exposure to hiking — by the end of summer maybe? — we can almost-die at the 2 mile mark. 😉 It was a beautiful hike fearuring lots of interesting trees, including various larches, which are deciduous conifers. Neat, huh?

We graced Tasty & Sons with our presence this morning. It was, as advetised, tasty. The company was spectacular! 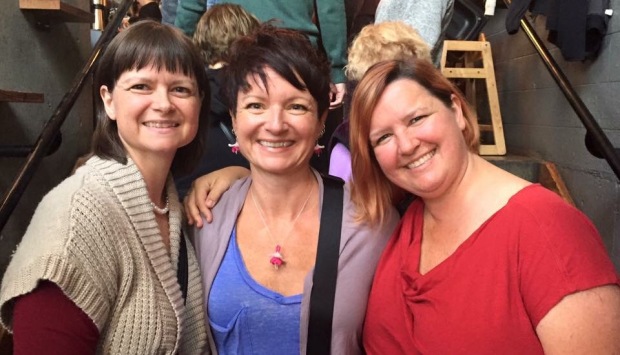